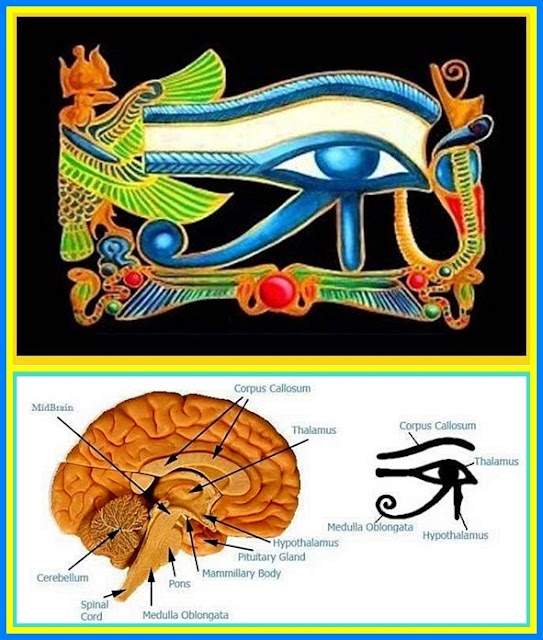 The Egyptians worshipped the Sun. It represented light, warmth and growth ~ the sun was seen as the ruler of all of creation. RA is always shown with a sacred sun disk on his head which represents enlightenment and connection to Divine Intelligence.

The Eye of Horus/Ra is symbolic of the mythologies and mysteries of the "ALL SEEING EYE", which is even depicted on the American Dollar bill. What is the significance of the "All Seeing Eye"? The "All Seeing Eye"  is the observer of reality ~ once awakened, the veils of illusion are lifted and we are able to "SEE CLEARLY". 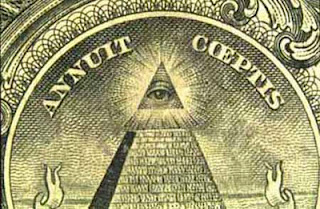 The "All Seeing Eye" is the third eye or the spiritual eye. It is a gland located within the center of the human brain called the PINEAL GLAND. This gland is oftentimes referred to as "the seat of the soul", and will remain dormant until the soul reaches a certain vibrational/spiritual level. Once this is attained, the gland is activated by the LIGHT of the higher self, signaling the divine energies from the kundalini (root chakra) to rise, activating the human chakra system. The physical being and the spiritual being become ONE ~ attaining a state of en-lighten-ment where the soul is able to perceive the higher dimensions. The Caduceus ~ the medical sign for health and well being ~ actually depicts the pineal gland as the round disc on the top of the staff with the kundalini energies spiraling up the spine (rod) activating each chakra. 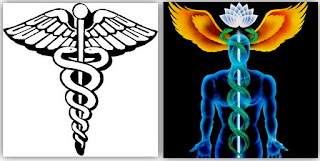 Through the continued spiritual practice of meditation the light from the pineal gland will continue to expand the light in the pituitary gland, as well as, the hypothalamus. DNA is activated and we return to our truth as God realized beings.

The Egyptian EYE OF RA/HORUS depicts the "secret" areas of the human brain that hold the potential for each human to attain their birthright of spiritual unification with their Higher/God Self. This is oftentimes called "The Mystical Marriage" where Spirit and matter become ONE. In order for this union to occur both the masculine and feminine energies within our beings must be balanced. Our truth does not lie in the duality of the 3D world where we are separated into either male or female. Our TRUTH is actually androgynous where both of our right brain and left brain energies have been merged and brought into a state of synchronization. The pituitary gland holds the masculine positive charge while our pineal gland holds the feminine negative charge ~ once they are brought into unification the multidimensional forces of spiritual light merge with the matter of our third dimensional brain. This is our true potential to BE in a place of Spiritual Protection, "LOVE" Based Power and Radiant Health and to TRULY know ourselves as ONE....as UNIFIED DIVINE BEINGS OF LIGHT!


Since the Earth has moved into the 5th dimension, now more than ever, the energies are here to support you in your transformational process. Meditation, active participation in the dissolvement of your discordant beliefs, ego and shadow consciousness, negative behavioral patterns, and sincere desire to release fear and expand more LOVE into your being will assist you towards the awakening of your true potential and your EN-LIGHTEN-MENT. ~ Sabrina

Click Here To Purchase The "RAISE YOUR VIBRATION" book: www.raiseyourvibration.com

Posted by How to Raise Your Vibration By Sabrina Reber at 7:16 AM