During the 11-11-11 Earth Keeper's event in Little Rock Arkansas I had the amazing opportunity to have a 30 minute session with Max. His energy is incredibly loving and powerful, yet subtle at the same time. When Max is touched, he downloads codes and information into your being that you are able to receive ~ based on your light quotient. Each person's interaction with Max is highly personal. Some people heard messages, while others received physical healing's, while others felt the loving vibrations running through their system. I personally experienced profound LOVE and a feeling of tremendous heart expansion. I also could feel downloads entering my crown chakra. When I went in to the session I had a cold and asked Max to please heal me......4 hours later my cold was gone.
Jo-Anne Parks, the keeper of the skull, travels the world so people can interact with the energy and consciousness of Max. Max disappears and returns to the Earth during the cyclic time periods of Earth's Ascension helping people to upshift their consciousness, as well as, prepare and activate the planet for it's ascension into a higher dimension. You will need to google your area to see if Max is coming in close proximity to you. I am currently unaware of a list of her upcoming travels; however, you can email Joann at maxandjoann@hotmail.com to if you would like to host a workshop with Max in your area.
Here are a few tips I discovered along my journey of interacting with Max:
1. Project a beam of love from your heart directly into Max and send Max LOVE. Max will return your LOVE back to you multiplied.
2. Lay your hands on Max's skull to receive a download, give thanks for this exchange of energy.

3. Place your nose in Max's hollowed out nose with your hands on his skull for a few minutes. Notice the activity in your brain as you do this....subtle vibrations and visual sparks from your spiritual eye are noticeable to those who have an opened third eye.

4. Sit in Max's presence and express GRATITUDE....send love and ask for healing. 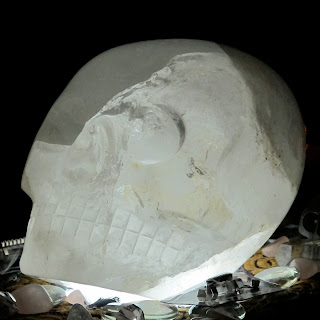 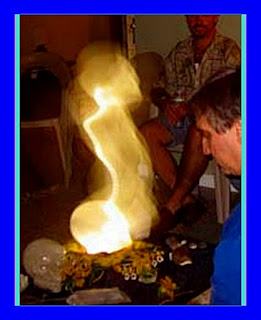 In this picture, MAX, the original 13th Crystal Skull is projecting a complete human Spinal Column and Cranium. This is truly a remarkable, very real photo, unretouched, of the incredible energy of MAX. He is the most powerful Crystal Skull on the planet, and is the source that feeds energy to all the others. Within MAX are the codes for the heralded Omni Earth Ascension. MAX is a vast consciousness, akin to a super computer, with a considerable library of data contained therein. He is the most powerful, exponentially most conscious of all of the Crystal Skulls. 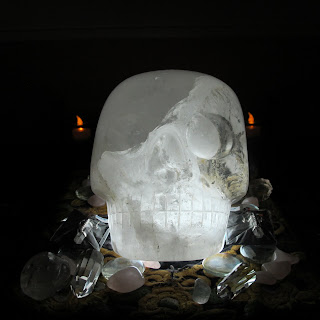 On December 21, 2012, all 13 of the crystal skulls will be brought together as planet Earth and humanity is activated.
"MAX, MAXIMUS CRYSTALLUS , is the source of energy received by all other crystal skulls." Metatron
In 1996, Max was carefully studied & intricately researched by the British Museum and tested for evidence of 'modern carving' technique and carbon tool residue. None was found.
All other 'ancient' skulls tested have revealed tell-tale marks of carbide residue and modern 'earthen' equipment tracking, including the Mitchell-Hedges. The Mitchell Hedges Skull, as well as, famous skulls others absolutely tested undeniable micro tracks of modern carving. (Being modern cut, however does not diminish the ability of a crystalline skull to download the paradigm. And it can be pointed out that skulls created in Atlantean times, would indeed have had highly sophisticated equipment, including manifestation from pure thought. So whether Mitchell -Hedges was fashioned in Germany in the 19th century, as the Smithsonian surmise, or not, does not reduce its incredible importance and energy.)
However, MAX is one skull tested that passed ALL the rigors. MAX not only shows no evidence of modern carving, he shows no evidence of carving at all. Under microscopic examination, MAX appears to have formed naturally...and that is an enigma or more accurately stated...tell-tale of manifestation !
It should also be pointed out that MAX's structure consists of 5 separate crystalline matrixes, that should not be mineralogically bonded together. But they are. With such 5 unique & succinct crystalline structures, differently aligned and with separate axis's , MAX could not have been carved even with today's sophisticated instruments and tools. MAX is an enormous quartz conglomerate, at over 18 lbs, and these five matrix centers are part of why MAX carries such infinite capacity of energy. Each represents one of the five creation geo- codes.
Max has been presented in several documentaries worldwide. Research films on MAX have been produced by the BBC British Network, and Everyman Productions in Britain. These have has aired on the A&E Network, National Geographic, the History Channel and the Discovery Channel all over the world. He has also been featured on the Travel Channel, "Top 10 Mysteries", Unsolved Mysteries and "Strange Universe". Spain, Russia and Japan have also produced technical studies and documentaries on MAX.
Information from: http://www.earth-keeper.com/
From World Mysteries : Max The Crystal Skull is the authentic, ancient crystal skull. Of the 13 crystal skulls in the world at this time, Max is the largest. Many people consider Max to be the 13th Crystal Skull, carrying the combined energy of the other 12. In any case, MAX is absolutely one of the rarest & most studied and revered artifacts ever found on this planet.
Max was discovered in 1924 in a tomb under a Mayan temple in Guatemala and was used by Mayan priests for healing, rituals, and prayers. He was given to a Tibetan Monks by a Mayan Elder. Many years later, the Tibetan Monk gave the skull to JoAnn Parks after working with her on the sad passing of her daughter.
The Monk told JoAnn that she would know what to do with MAX. She has been 'chosen'. For over a decade MAX sat in her closet. Then one day , JoAnn, who is a down to earth, previously 'non-Metaphysical person, began hearing a voice speaking to her. "My name is MAX and we have a mission to do". JoAnne was amazed, and with some research contacted famous Crystal Skull researcher and pioneer, Dr Nick Nocerino.
After JoAnn described MAX. Nick quickly flew out to investigate, and was overjoyed and amazed with what he saw.
"This is the crystal skull the Elders spoke about", Nick exclaimed, "The one with the cap over the right eye !". Mayan legends had spoken about a Master Skull with the unique physical description that fit MAX. The 13th Crystal Skull. It was MAX.
MAX has been studied by the British Museum and reviewed by famous geologist Dr Robert Schock. The scientist have reported that, even with our most modern laser technology, MAX, because of his unusual combination of 5 separate crystal-matrix growth centers in his structure, could not have been carved without fracturing the crystal formations that form him. His existence in mass is simply an enigma, he could NOT have been carved.
This information was taken from:
http://www.world-mysteries.com/sar_6_1.htm
Posted by How to Raise Your Vibration By Sabrina Reber at 8:15 AM